This fortnight I am crossing off the square Book with a place in the title, author Alison Stuart pointed out that this would be the perfect book for that square.The choices are getting smaller. If you have any suggestions for the remaining squares, I’d love to hear them.

Early twentieth-century Singapore is a place where a person can disappear, and Harriet Gordon hopes to make a new life for herself there, leaving her tragic memories behind her–but murder gets in the way. 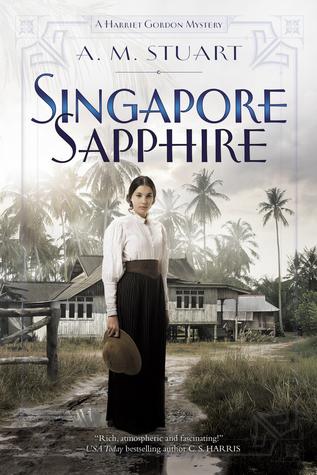 Singapore Sapphire is book #1 in the Harriet Gordon Mystery series and was a great introduction to this new character and setting of 1910 Singapore. I enjoyed this novel a great deal and thought Harriet was a great character, she was a contradiction of the times and definitely not one to be kept in a box. Harriet takes things into her own hands doing some investigating of her own to try and figure out who the murderer is.

My favourite character after Harriet was Inspector Robert Curran who is in charge of the murder investigation. He was another character who was ahead of the times and didn’t always toe the line. I really enjoyed his interactions with Harriet and how he realised it would be helpful to have her on his side rather than trying to make her stand on the sidelines.

This isn’t a simple murder though and there are many twists and turns, people who aren’t who they seem to be and mysteries that arise from the past.

The imagery that Ms Stuart manages to portray through her words was wonderful and I could absolutely see Singapore as it was in 1910. The characters of the ‘good guys’ and the ‘bad guys’ were well written, I definitely wouldn’t have wanted to be on the bad guys hit list.

I look forward to the next Harriet Gordon Mystery.

Thanks to NetGalley and Berkley Publishing Group for providing me with a digital copy in return for an honest review.