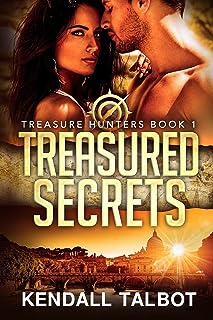 I bought this book back in 2015 and it has been sitting there waiting for me to read it ever since, when hearing book 4 was being released shortly I thought I should do something about reading it (I also have book 2 waiting which I bought in 2016, that’s up next).

This was an action-packed read with danger in unexpected places and secrets which have been buried for 100’s of years.

Archer and Rosalina’s relationship ends because he won’t open up and tell her his own secrets, when she comes across something in a church in Italy that is reminiscent of a pendant Archer wears, she contacts him demanding he tells her where he got it. And so begins the start of a treasure hunt.

Archer and Rosalina are still very much in love, but Rosa has tried to move on and Archer hasn’t been able to open up and tell her his heartbreaking secrets. Now it is time for them to reassess and hope that they both get a chance for a second chance at love as well as staying alive long enough to make that happen.

The bad guy is a crazy priest, who had me scared because of just how crazy he was, determined to find the treasure himself, he’ll go to any lengths to make it happen.

The supporting characters were fun to get to know too and I hope we see more of them in the next book.

This was an enjoyable read and I  can’t wait to see where this treasure leads them next in Treasured Lies.