I enjoyed this final book in the trilogy, it can be read alone, I’ve only read books two and three, book one is still waiting quietly in the Kindle vault and I was able to grasp what was going on, I think it would flow better if you did read the series as it is written though and it’s such an enjoyable series, romance with a touch of Paranormal, that why wouldn’t you want to read them all.

Pepper is a headstrong character who doesn’t always think before she speaks, with so many things placed on her shoulders, she seems to do it a lot, getting herself into strife more than once.

Her old friend Jack, and the person who has been tasked with keeping her safe, is a lovely guy, who has mixed emotions about Pepper.

Both are in denial of the things they really want, there’s some unspoken secrets and conversations from the past that should have been worked out years ago, but are now continuing to cause issues for Pepper, Jack and some family members.

Once again the bad developer guys are back and causing plenty of trouble for Pepper and the townsfolk.

There was plenty of humour in this novel and I enjoyed once again the paranormal tilt to the story.

It seems a shame to say goodbye to Calamity Valley, but at least all three towns are in good hands.

Thanks to NetGalley and Tule Publishing for a digital copy of this book in return for an honest review.

I really enjoyed Overdrive: book 1 in Calhoun Customs Garage series when I read it last year, but I loved Fast Lane: book 2 even more. 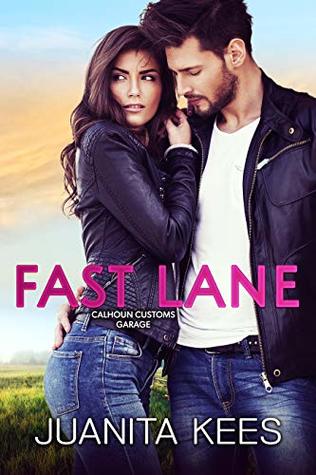 There’s plenty of adrenaline-packed action and chemistry to be had in this book as well as some more serious issues.

Trinity Calhoun is a world-class race car driver and she’s just about to retire and return to Bigfork to be with her dad who is struggling with Parkinson’s. A freak accident in her last race has her meeting gorgeous paramedic Reece, better known as Angel.

Racing is a dangerous sport and a tragedy has touched Reece and he is now guardian for 9-year-old Tyler. This tragedy has also brought him to Bigfork.

I really enjoyed returning to the town and to the Calhoun family.

Trinity’s love of speed and Reece’s dislike of the dangers of speed and cars mean that these two getting together have them needing to overcome some obstacles. I really enjoyed the growing relationship between these two, something that started out as a fun kiss turns into so much more. I liked the way they discussed things and tried to work out what they both wanted.

One character I hope we get to hear more from was Tyler, he has survived a tragic accident, but has definitely not come out of it unscathed and it will take a lot to make him feel whole again. Having Reece and Trinity in his corner will definitely help his healing and I really want to know how he goes after this book.

I also look forward to seeing how the other Calhoun siblings go with finding their HEAs, it was great to see how Chase and Charlie were going from book 1.

I hope I don’t have to wait 12 months for the next instalment of the Calhoun Customs Garage.

Thanks to NetGalley and Tule Publishing for a digital copy of this novel in return for an honest review.