Thanks to Beauty and Lace Book Club and Pan Macmillan Australia for a copy of this book to read and review.

Wow this was a massive book, over 600 pages! I wondered if I’d manage to get through it.

This was my first Lucinda Riley book and I’d heard so many great things about her novels and about this one, that it had a lot to live up to.

This was a great read, it did take until halfway through for me to feel I was really getting into the story, but once I got there, I didn’t want to put it down. It is another dual timeline novel, which seem to work so well these days. I found I enjoyed the now timeline more than the past timeline, I was able to really get into it and there were many many threads all weaving their way to become a whole.

To begin with I only really liked Posy, both past and present Posy, she was a great kid and a just as great older lady. But as the story moved on, most of the characters grew on me and I found myself hoping that things would work out for all of them. The only exception was Posy’s son, Sam, he was one character that I had absolutely no time for and seriously hoped he’d get what he deserved, and to a point he did, but I felt he deserved more lol.

There were plenty of secrets to uncover, a few really big ones. I have to say, I do get annoyed when characters won’t communicate with each other and Posy’s son Nick does just that with his girlfriend Tammy, so many misunderstandings could be avoided if he’d just manned up and told her what was going on, I felt he didn’t deserve the girl at one point, I thought it was ridiculous not to tell her what was going on. Authors seem to enjoy adding in this biplay between characters, I wish they didn’t though as I find it so frustrating.

Overall this was a highly enjoyable read and I’d give it 4 ⭐⭐⭐⭐.

The Lost Letters of Esther Durrant is a dual timeline novel set in both 1951 & 2017. The book starts in 1951 with Esther’s husband taking her on a supposed holiday to the Scilly Islands, I was horrified at the turn of events when it turns out he is committing her to an asylum. I had to put the book down I was that disturbed that a husband could have the power to do something so underhanded. I felt Esther’s shock and disbelief in what was happening to her. 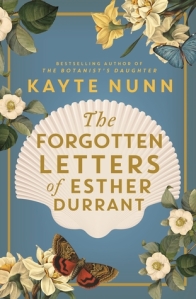 In 2017 we have two separate stories, the first being Rachel, a marine scientist who gets a job on one of the Scilly islands and when an accident occurs she comes across some letters from 1952 addressed, but never sent to Esther. Rachel is very curious and touched by the letters and decides to try track down Esther and find out who wrote the letters.

We also meet Esther and her granddaughter Eve, Esther is telling Eve her life story for an autobiography of her life that they are writing.

The novel switches between the three storylines as we slowly uncover what happened to Esther on the island and learn the secrets she has been keeping for over 60 years.

Rachel was a tough character, afraid of getting close to people she flits from place to place, I found her interference with one of the characters in the story’s life to be wrong, even though she was coming from a place she thought was right. I really liked Jonah, one of the men living on the island that Rachel moves to, I found him such a warm and thoughtful guy and loved the way he pushed Rachel to think about her life and what she was doing with it.

There are many secrets uncovered in this novel and a few twists that I wasn’t expecting. I loved how Esther became a mountaineer, which back in the 50’s would have been nearly unheard of for a wife and mother. After all Esther had been through, she led an interesting life. The ability of a husband to commit his wife still leaves me cold, no matter what the reasons for him doing it, I can’t get over this fact, no discussion, nothing, Esther’s power and choices were completely taken away from her at this time. Thank goodness this is one thing that has changed since then.

This was a highly enjoyable story.

Thanks to NetGalley and Hachette Australia for a digital copy of this book in return for an honest review.

Thanks to Beauty and Lace Book Club and Pan Macmillan Australia for providing me with a copy of this novel for review purposes. 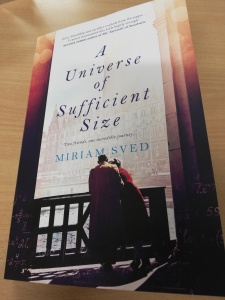 I’ll start by saying that I ended up really enjoying this novel. If I hadn’t been given it to read and review, I wouldn’t have gotten past the first 100 pages though, actually, not even that far. So I’m really glad I had to keep reading because it was well worth persevering with this story.

This is a dual timeline historical fiction novel that revolves around 5 friends who are mathematicians in Hungary in 1938, teens who have lost the right to go to university because they are Jewish. Despite reading a fair few books set around WWII, I really still have no idea how Hitler, referred to in this novel as the small German psychopath, and his rules and laws completely affected and persecuted everyone of Jewish descent well before the war actually started. From not being allowed to work in most jobs, study or have freedom to move around their country, or out of it. I especially knew nothing of the people from Hungary.

The story itself was great, it was the mathematics that had me thinking, I am not enjoying this, I completely do not understand anything they are talking about. But if you can get through the larger chunk of mathematical concepts up to the first third of the book, then you will discover a really good story, one with a mystery and secrets that we slowly uncover through the reading of a notebook in the present timeline in Australia.

The present timeline, set in Australia is one of a largely disfunctional family, who’s younger members are trying to find their way and follow their dreams, who’s mother, Illy is feeling lost while trying to deal with her adult children and her elderly stubborn mother, Eszter, as well as a husband she’s not sure of anymore. As dreams for the future converge with secrets from the past, the family dynamics will undergo some interesting changes.

I was completely engaged with the characters, both past and present, wanting to know what would happen next and what had happened to them in the past. There’s a huge twist near the end that I completely did not see coming, which is something I love, I love being surprised when something completely unexpected happens in a story I where think I know roughly what is going to happen or be uncovered.

It’s a story of friendship, love, family, hope, dreams and mathematics. As well as persecution and fighting back any way you can.

What a wonderful story Alli Sinclair has created in The Cinema at Starlight Creek. At its heart this is a story about following your dreams and your heart. It’s also about love, friendship, heartache, community and change and about having and being a voice for others. This is a story I’ve been anticipating since I heard about it nearly 7 months ago. It’s a dual timeline narrative, which is one of my favourite genres, blending historical with modern day stories. It has the most delightful cover, one of my favourites, especially as it tells the story so well.

I was transported to 1950s Hollywood so completely, I could see it all playing out in my head, just like a movie. Lena Lee, Hollywood starlet’s story was a very powerful one about a woman who followed her dreams and fought for what she believed in as well as giving others less fortunate a voice and paving the way for more equality between men and women in the movie world. If we think things are hard and less than equal now, you can imagine how hard things were then. Lena Lee gives us a voice, a real person to travel with and discover what it was like for women back then, especially a woman with integrity and a kind heart like Lena had. Though things have changed a great deal, things are still much the same around the world for women, we need people like Lena Lee to keep fighting for change and equality.

I had very little knowledge about the film industry in the 50s, yes, I’d heard of the hunt for communists, the Hollywood blacklist and the Hollywood 10. People who were jailed and or barred from the industry, most times for no good reason. I might have heard something about the censorship placed on the movie business, but had no idea how much influence, the Hays Code had on what film producers were able to put in their movies. I found this to be a very interesting part of the story. Now days these people would have a heart attack at what is played out on the screen.

Now cut to 1994 in small town Queensland, a town called Starlight Creek and a run down art deco movie theatre. We meet Claire who has been tasked with finding and acquiring the use of one of the last cinemas designed by a female architect Amelia Elliot so as they can continue filming a mini series. Claire has big dreams of making her own documentaries one day, and she is working her way up through the industry, this is a make or break time for her. Even now chauvinism is rife in many industries, (I should know, I’m in the mining industry), and Claire has to work harder to prove herself while up against many odds.

We meet Hattie, a strong and stubborn older woman who owns the cinema and her nephew Luke, neither of who want to help Claire with her plans.

I loved Hattie, she seemed like such a generous soul, one who had much to teach Claire and Luke. I loved Claire whose determination and belief that dreams could come true and you could have everything you wanted, were in direct opposition to Lukes ideas and beliefs. I loved getting to know Luke and when he opened up to Claire about his dreams, I was sure Alli Sinclair had been looking inside my head, I could totally relate to his dreams as they are in essence my own. If only he (and myself) could believe in them and trust they can be made real.

As well as the history, the icons, the dreams, the role models, there is of course the romance. Both Lena Lee and Claire encounter men who make them question their paths, though the outcome for these relationships is quite different for each woman. I loved both storylines, but part of me loved Lena Lee’s a fraction more. Everything Lena went through felt so intense and there’s a few scenes that made me teary (just a warning).

This is a wonderful story and I enjoyed every minute of it, it definitely was worth the 7 months of waiting to finally get to read a copy.

Thanks to Harlequin Australia, NetGalley and Alli Sinclair for providing me with a copy to read and review.