When I first read this novel two years ago, it was not my normal choice of reading, but after reading Black Diamonds by Kim Kelly and loving it, I just had to read another Kim Kelly book. This had me up until 2 am 3 nights in a row, just one more chapter and 4 hours later with the words blurring I was reluctantly putting it down. 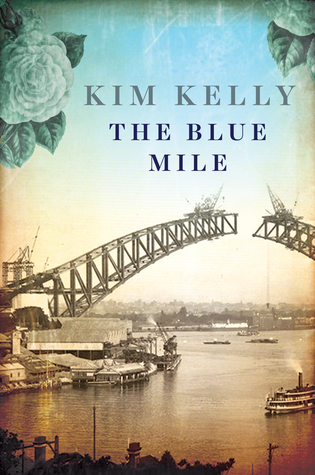 As part of my driving ritual, I decided to try the audio version of The Blue Mile after enjoying the audio version of This Red Earth, I was keen to hear this story. The narrators were good, Eoghan’s narrator was perfect, while Olivia’s not so perfect, for me anyway, because having already read it, I had a certain voice for her in my head; I grew used to the narrator though and enjoyed the reading of this novel.

Olivia, Eoghan (Yo), and Agnes were such wonderful characters. I loved little Agnes’ ability to see magic all around her. I love the descriptive way that Kim uses to describe the people and the places in her novels. The use of clothing and clothing design was a new take on things for me and I really enjoyed it, they were like a character all by themselves. The secondary characters were also wonderfully portrayed, some were wonderful people, some not so wonderful, all necessary to the telling of this tale.

Set in 1929 in Sydney during the building of the Sydney Harbour Bridge and the Great Depression. I learnt much about the history of the building of The Sydney Harbour Bridge (I’m glad I didn’t have to work up there, I’d have been terrified, mind you Eoghan wasn’t exactly thrilled either) and the politics at that time were also very interesting, I learnt a lot about the labour laws of the time. I love learning about the history of our country and getting an insight into how people got by. The unemployment situation then was just terrible and the violence that occurred would have been extremely terrifying to have been witness to.

This second ‘reading’ of The Blue Mile was just as enjoyable as the first and I loved meeting these characters for a second time.

I first read This Red Earth back in 2017 and it was a definite 5-star read. I always like to have an audiobook going in the car, so when I saw Kim Kelly’s books were available on my library app, I thought it was time to revisit her stories. I’m very fussy about my narrators, I’m sure I’ve mentioned this in the past, but the two narrators for This Red Earth did an absolutely fabulous job of capturing the characters of Gordon (Gordie) and Bernadette (Bernie).

This Red Earth is a fabulous story full of love, drama, intrigue, and the beautiful and hard land that is Australia. I fell in love with the characters in this story the first time I read it, and I fell in love with them again whilst listening to it this go-round. I lived through the good, the bad and the terrible times with them as if I were there. Once again Kim Kelly draws us in and lets us live the history of this land and its people.

We travel through the outback of NSW to sheep stations where we meet some wonderful characters and learn how important community and the CWA were in those times. We travel to New Guinea with Gordie who goes there to do a job drilling for petroleum and gets caught up in the Japanese invasion during the Second World War. I know very little about this time, but Kim Kelly picked me up and plonked me on this island in the middle of chaos, it was a terrible time, the whole World War two and all wars before and after were terrible and it’s a sad thing that nothing has ever really been learnt from it when it comes to the people in power.

Another aspect of Australian history I know little about is the incarceration of immigrants during the war. I am astonished, (well actually, I’m not, because the same thing happens today on a much larger and more terrible scale with asylum seekers and the Australian government), at the way people who had been living a peaceful life, who had come to Australia to start a new life, often because of persecution in their own country, were thrown in concentration prisons as enemies of the country.

Bernie and Gordie were strong characters who fought for the rights of others and for themselves. Their relationship was one that endured so many bumps (often mountains, not bumps), and I was fearful at times that one or the other of them might not make it through.

This is an emotional read, but an inspiring read of courage and hope and perseverance.

I highly recommend this novel and can’t wait to read or listen another Kim Kelly story.

This week I mark off another square on my Bingo sheet. I’ve picked Historical for this fortnight’s square and chose new release novel  The Postmistress by Alison Stuart for this square.

A historical fiction novel set in the harsh Australian outback and gold mining town in 1871.

In a small struggling mining town we meet Adelaide 10 years on from the Prologue where she is making a life for herself and her son. For me, Adelaide came across as older than she was, this would be because she’d had to eke out a living for her and her son and her friend Betty, who I loved. She portrayed herself as a widow so as to be socially acceptable for the times, a single, unwed mother would not be at all respectable.

I loved the character of Caleb, an American who comes to town to look at a mining claim. Caleb has some traumatic history he is running from and secrets, just like Adelaide.

I enjoyed the relationship between Adelaide and Caleb, and Adelaide’s son Danny. Caleb’s arrival is the catalyst for much change in the small town.

We have a completely unlikeable character enter the picture at one point and I seriously questioned Adelaide’s judgement with her decision making. But in those times, women would’ve felt they had less choices than they do now.

The small town characters and problems were depicted so well, I could see them all clearly in my head. I really enjoy this novel, which at its heart was a love story, with hardships and suspense thrown in to the mix.

Thanks to NetGalley and Harlequin Australia for providing me with a digital copy in return for an honest review.

This is in my library as a biography, but I’m inclined to say it’s a mix of biography and historical fiction. This was such an interesting read, based on the true story of Esther the First Fleet convict girl who became First Lady of the colony.

Written in a diary like form, the story spans over 30 years. This is the first book I’ve read about the First Fleet and it was extremely interesting, especially Esther and her husband George Johnston’s life. Esther was an extremely strong woman, any woman would have had to have been to survive the conditions of the convict ship, then life in a new country that until then had not been populated by anyone other than the aboriginal people. I was disappointed we didn’t get to read much about the plight of the indigenous people, they were mentioned, how could they not be in a story about the founding of Australia by white people, and the way they were treated and the way they fought back to begin with was both interesting and terrible.

I definitely recommend this book if you are interested in Australia’s history.