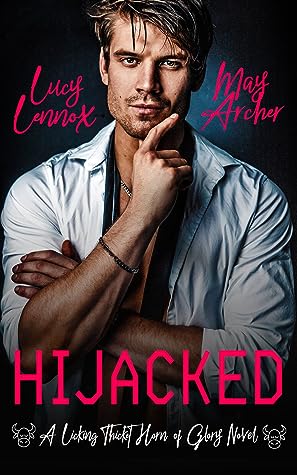 Renowned cardiologist Carter Rogers is used to having things under control. His life, his prestigious reputation, his career, his future.

Renowned cardiologist Carter Rogers is used to having things under control. His life, his prestigious reputation, his career, his future.

Things he can’t control this time around:

• Being the meat in a feuding cartel sandwich

• Getting kidnapped by a monologuing drug lord

In short, Carter’s peaceful, well-planned life has been… hijacked.

After two days as his bodyguard, I was ready to throttle my principal my own damn self.

I was also covered in more sweat and filth than I’d been on my worst day ever in Afghanistan.

The duchess, meanwhile, seemed as pristine as the moment we’d landed, of course—and unfairly fucking gorgeous, not that that mattered. But then again, he hadn’t been the one schlepping all of the supplies on and off buses, up and down half-broken stairs, and into a stifling storage room at the back of the small medical building where we’d be spending the next month of our lives.

No, that privilege had been all mine ever since he’d brilliantly pulled the “grandfather card” on me. It was a card he’d been slapping down at least once an hour since we’d left Tennessee.

“Grandfather would be upset if I got a hernia.”

“Pretty sure my grandfather wouldn’t want me coming home after only a day because I strained my back hauling boxes around.”

“I would hate for you to get in trouble with your boss if I slipped and fell into that rocky ditch.”

“I wonder what my grandfather would think about a former Marine who was afraid of a little physical labor.”

That had been the straw that had broken the camel’s back, as I’m sure he’d intended. You didn’t throw down a challenge to someone’s service branch like that. It

Besides, hauling his shit kept my hands too busy to throttle the fucker… or to kiss him. And that was becoming more and more necessary as this interminable day wore on. I had thought being a jerk to him at his grandfather’s house would have helped me keep my distance from him. It would be easier not to be tempted by the beautiful, successful man if he hated me.

But instead of being an asshole back to me, he was an enticing kind of passive-aggressive. He acted like he was sweet as pie while he pursed his lips in false disappointment for having to force me to do all the grunt work.

The doctor was diabolical. And it only made me want him more. I’d watched him at the gala. The adorable way he joked with the bartender and the kind manner he had with the locals were enough to attract my notice even before I’d discovered he was my principal on this job.

But he was off-limits, so I needed to shut my attraction to him down and shove it away if I wanted to stay on my boss’s good side.

As I re-entered the main room of the clinic, I heard Carter’s cultured voice speaking to Eriko, the man who’d welcomed us to the Doctors Across Continents facility in the rural town of Gelada. “No, no, getting here on our own was no problem! Mr. Riggs—oh, and please make sure you call him Mr. Riggs, because he really enjoys that—that man is never happier than when he’s useful. Carrying things is literally his favorite activity! Many a time I’ve tried to encourage him, ‘Mr. Riggs, please put down the box! That’s too heavy!’ but he simply refuses. ‘I’m enjoying myself too much, Dr. Rogers!’ he’ll say, and then he’ll pick up more boxes. So by all means, if you have heavy things to be moved,

Eriko murmured a reply I couldn’t hear over the gritting of my teeth, and Carter laughed lightly.

“Oh, no. He’s not really my manservant, per se. More like a man who serves as… my assistant. And of course he’ll be happy to help transport any patients who can’t get here on their own! I daresay he’d enjoy the challenge. A few more notches on his heavy-things-I’ve-carried belt! He’s good for the physical tasks, not so much the…” He glanced up at me innocently when my boots made a sound on the floor. “Oh, speaking of the devil. Mr. Riggs, I was just telling Eriko that you’d love to help retrieve any invalid patients who need help getting to the center. Isn’t that right?”

The look on his face begged for a solid love tap from my fist. But at the same time, the look in his eyes—teasing, intensely intelligent, just like he’d been at the bar that night at the Licking-Nuthatch Gala—made me want to tap… other parts of him. Parts that would land me in serious trouble with Champ or possibly on the unemployment line, if my distraction didn’t land us in danger first.

“I think it makes more sense to stay here and assist you, Doctor. Remember the problems you’ve been having with your…” I glanced at Eriko with a grimace. “Digestion? I’d hate to leave you alone in case it comes roaring back.”

Carter’s eyes narrowed the slightest bit. I’d made up the part about the digestion problems.

Or, okay, I hadn’t made them up so much as transferred them from me to him.

“Yes, right,” he said, rather than correcting me. “You do like to clean the toilets as

soon as I’m finished. Thank you for the reminder.” He turned back to Eriko. “Such a helpful boy. Don’t know what I’d do if he fell off the side of a cliff. Or whatever. Anyway, we should be ready to begin receiving patients at seven tomorrow morning. Hopefully we can prioritize the people who need to get to work.”

As Carter listened to the local man, who at this point looked like a deer caught in confused headlights, I got the lay of the land. We were in a fairly large room, maybe twenty by thirty feet. The building was made out of cement blocks, which actually provided a little break from the heat of the day. Large industrial fans that looked like they were several generations older than Eriko blew from two corners of the room, creating some much-needed ventilation. Two windows on either end of the room were covered with thick iron bars for security, and there was a similar metal security door on the front and back of the building. They were currently propped open to keep the air moving. Several locals had already poked their heads in and asked if the clinic was open yet.

“The bedroom is just there,” Eriko said, gesturing to the other door at the back of the building. I glanced over at the small room, replaying his sentence in my mind until the word “bedroom” turned plural from wishful thinking. “There is a pallet on the floor for your helper.”

I tilted my head at him. Was he trolling me?

Eriko looked very pleased. He informed Carter that someone from the community would be stopping by with our dinner and we were welcome to spend the rest of the

evening setting up for tomorrow’s clinic.

“We are very grateful you are here. The people of Gelada have to travel very far to see a doctor. Many of them do not have money for the bus. When you come with your supplies and medicines… well, we are truly blessed.”

Carter’s face softened. Suddenly, I could see the doctor behind the snarky duchess. “It’s my pleasure. Thank you for having us.”

As soon as the local man was gone, closing the outer door and making sure Carter locked it from the inside, Carter’s smile disappeared.

“Aw. Someone looks like he’s having a grumpy day,” Carter remarked with fake sympathy as he passed me. “What’s wrong, Mr. Riggs? Not enough box carrying for you?”

“Just thinking that this pallet looks like it’s going to hurt your back.” I folded my arms over my chest. “Might consider hitting up the med cabinet before hitting the hay, Duchess.”

Carter didn’t even turn around and look at me. He simply said, “Duchesses don’t sleep on pallets, Mr. Riggs. This is well-known.”

A fun light read, a bit crazy in places but enjoyable all the same. Cardiologist Carter Rogers is from rich stock and when he heads off to the jungle he is forced to take reluctant bodyguard William Riggs with him. This is Riggs’ penance for upsetting his boss.

From a missing gaming programmer, kidnappings, drug cartels and the crazy ‘leader’, it is nonstop chaos for Riggs and Rogers who are also fighting a strong attraction.

There is plenty of humour, some of it very tongue-in-cheek, Licking Thicket, the name of the town itself, should be enough to give you an idea about some of this humour. The missing gamer has made a game called Horn of Glory, which it seems no one can stop playing (I can see how it would be a game that people could waste a lot of time on). Carter’s nerdy cousin is a sweet side character as are Rigg’s coworkers.

This was my first read by these authors and it wasn’t quite what I was expecting, but it was still an enjoyable read and I would read more of their work.

Lucy Lennox is finally putting good use to that English Lit degree earned way back in the 1900s.

She stays up way too late each night reading M/M romance because she is a sucker for a good story.

Connect with May Archer

May is an M/M author who lives in Boston. She spends her days raising three incredibly sarcastic children, finding inventive ways to drive her husband crazy, planning beach vacations, avoiding the gym, reading M/M romance, and occasionally writing it.