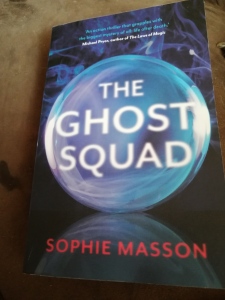 This was a really great read, I’ve been reading a lot more speculative fiction so far this year, a genre I used to read a lot of, but one I seem to have neglected over the last couple of years.

This is the first book I’ve read by Sophie Masson who has a large number of books to her name.

The Ghost Squad was a really novel idea, one I found very interesting. What if you had the opportunity to find out what was really on the other side when you die? Due to a Pulse that wipes out all electronics, there is an unexpected side effect, one that has been kept from the general public, people who one group call the ‘gulls’, a secret that could change everything.  There are two organisations, The Ghost Squad and the Base, both who have their own agendas and both believe they are the right ones. Three different groups of people are discovered after the Pulse, this is the secret that is being kept, (I don’t want to give too much away). Of the three groups of people who come out of the Pulse, I’m not too sure which one I would want to be in, and whether I would want to know if I was aware of them.

Some of the terminology was confusing at the beginning and I wish I’d realised there was a glossary at the back because I probably would have read this first so I didn’t feel so confused, but everything became clear as the story unfolded.

The three main characters Swan, Polly and Kel all come from differing backgrounds. Kel knows all about the secret, he has one of the unexpected side effects to come out of the Pulse. Polly is part of the general public, going about her own business, completely unaware of what is being kept from society, Swan works with the Base, but after meeting Polly and Kel, his beliefs and loyalty are tested. I liked these characters a lot, especially Kel, I had a soft spot for him.

This book was full of twists and turns, conspiracies, relationships, secrets, danger and action. I really couldn’t foretell anything that was going to happen and it wasn’t always clear who to trust or who to believe. There were plenty of people and factions to be wary of along the way and there were some unexpected allies too.

I recommend this if you are looking for something engaging and different. I feel there should be a sequel because I think there is so much more to uncover and fight for, but I’ve been told there is nothing planned at this point. It does end in a way that is satisfactory, I just want more.

Thanks to Midnight Sun Publishing for providing me with a copy of this novel in return for an honest review.