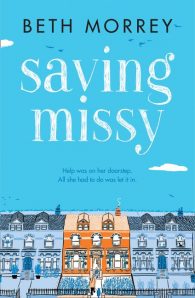 I read this as a group read-along, it had been sitting on my kindle for a while, but this was the kick I needed to pick it up. We read it in 4 parts over 2 weeks, which is a lot slower than I would normally take to read a book, but stopping after each part for a group discussion about the novel was actually a really interesting way of reading and opened up some very interesting discussion, as well as some conspiracy theories.

Saving Missy was an enjoyable read, though it took me until part 2 to really get into the book, up until then, I really wasn’t a big fan of Missy, so if you feel the same way, I advise you to persevere.

Missy has had a life that wasn’t what I would call a great one, she married ‘the love of her life’, but I really didn’t like her husband at all, he seemed to me, from what Missy tells us, to be a pretty self-centred man. She has two adult children, one whom she doesn’t have the best relationship with, and we explore this as the story progresses, and the other lives on the other side of the world, but it is him she dotes on.

Missy isn’t a very likable character when we first meet her, but I did feel very sorry for her, she was a lonely soul, who thought nobody would be interested in truly being her friend.

One day while on a walk in the park, she meets Angela and her son Otis, this is a catalyst for all that is about to happen in Missy’s life. She also meets Sylvie, who is a force to be reckoned with. Between the two of them, and Otis, along with a dog called Bobby, Missy learns all about what true friendship is and these friendships change MIssy in ways she never expected at her age.

There were a couple of mysteries of sorts, which meant I had to keep reading to find out what was what, and there was an unexpected reveal near the end of the novel which I wasn’t expecting.

This was an easy read and an interesting exploration of expectations, life choices, and friendships, as well as motherhood.

Thanks to NetGalley and HarperCollins Australia for a digital copy of this novel in return for an honest review.