New Zealand author Carole Brungar is able to write of an incredibly terrible time, the Vietnam War, in a very emotive and realistic way. I can always see myself there during those terrible times, whether in the jungle with the soldiers, in the helicopter flying into dangerous situations or at the hospital tending the children with horrific injuries. I can smell the smell and hear the sounds of everything that is going on during these chaotic and dangerous times. 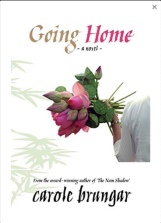 This book, the third in the Return to Nam series, stories about the Vietnam War and the NZ soldiers, nurses, photographers and entertainers, who went there without knowing what the were flying into, takes us out of the jungle and into the town, where Ronnie has signed up to do a stint (12 months) as a nurse.

When New Zealander Ronnie arrives she has a naivety about her, but she is a strong and determined young woman, whose strength and determination get her through everything that happens during her time there. She works tirelessly for these children and instigates many changes to the ward to help with the healing of these children who have been caught up in the middle of this war.

Ronnie meets American pilot Joseph who is on his second tour of duty, they hit it off straight away despite Ronnie believing that nothing can come from having a relationship during a war. Joseph is a strong and happy character who lives for the thrill of going into dangerous situations.

I really enjoyed the relationship these two built between them and I loved Joe’s perseverance when chasing Ronnie and trying to get her to want more.  I could see things from both characters POV, it isn’t really a great time or place to fall in love, but at the same time, what if this is their only time and place in which it can happen, the future certainly was not guaranteed for anyone.

There were several very tense times throughout this novel when danger showed it’s head and not always from where you were expecting it. There were a few tears and some moments of joy and many many times where I thought, there is no way I would have survived what these guys have been through.

The cast of supporting characters was great to meet and I really enjoyed the small appearances from characters from the previous two novels The Nam Legacy and The Nam Shadow. I really look forward to whatever Carole Brungar brings us next. If you are interested in a novel about relationships and the Vietnam War, then I highly recommend this novel and the previous two novels in the series.