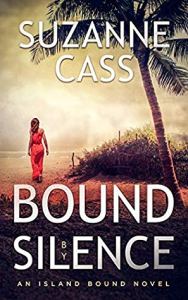 Bound by Silence by Suzanne Cass is book #2 in the Island Bound series and while it can be read as a standalone, the two main characters, Sierra and Reed, from book #1 Bound by Truth, play a pretty big role in this novel and they will continue into the next, so I’d advise you to read book #1 first, saying that, you won’t be lost if you don’t but the first book was really good and lays some of the backgrounds for our characters.

In Bound by Silence, we meet Keira, who is living in Hawaii and who witnesses a crime, watches her house be consumed by lava and is now on the run from some seriously bad guys. I kept changing my opinion of Keira, I liked her, then I thought she was a spoiled brat, followed by feeling terribly sorry for what she’d been through with her husband and being able to understand where some of her behaviours and thoughts come from, then liking her again. I wanted her to show some of the mettle she’d shown at the beginning of the story when she starts out on the run, but now and again she slipped into complete victim mode, which annoyed me. But at the same time, she’d lived through a lot and now her life was in danger, she was allowed to act like a victim for a while.

The things that Keira went through with her husband were quite hard to read about, she suffered terrible emotional abuse at his and others’ hands and that made her trust no one, while at the same time feeling that she was worth nothing. It is hard to fathom how people can blame themselves so completely for the way other people treat them when it is those people who are to blame.

I really liked Dalton, a bounty hunter, who inadvertently ends up rescuing Keira and becomes a target for the bad guys too. He struggled with what was right, morally and by the law, but chose to believe Keira and keep her safe while finding a way to prove she is innocent of a crime she’s been set up for in order to flush her out.

Keira’s sister Sierra and her now fiance Reed turn up in Hawaii as all this is going down, and using their skills as journalist and police officer, they go about tracking down evidence to help clear Keira’s name and prove who the bad guys really are.

There are some pretty hairy moments throughout this novel, where things could go either way for all four of our good guys, and there is a surprising twist, proving you don’t always know the people you think you do.

I did enjoy the chemistry between Dalton and Keira and I liked how much restraint and respect Dalton showed towards Keira. Some of the banter was fun too.

An enjoyable sequel in this series, I look forward to book three when Keira and Sierra go looking for their brother who seems to have disappeared.

Thank you to the author for providing me with a digital copy of this novel in return for an honest review.

One thought on “New Release Book Review: Bound by Silence by Suzanne Cass”