Another fortnight down, time to cross off another square from the bingo card, this week I’m marking off two squares again. 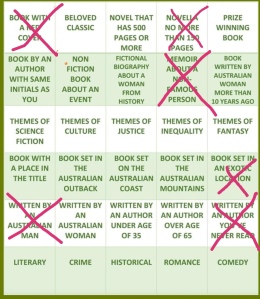 First is a book Written by an Australian Male, for this, I have chosen Michael Trant’s Ridgeview Station which was a fabulous read. 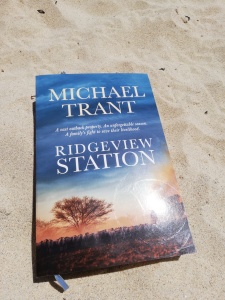 Ridgeview Station is an unreservedly genuine tale of life on the land, full of family, friendships, hard work, trials, loss, hope, and community. The characters in this story are real people, just like us, full of hopes, dreams, and faults. They are hard-working people who are passionate about the land and about their business. “He’d made the comment that since the house wasn’t at risk and it was just bushland burning, he would allow it. The family, however, were more worried about the bush and the stock than their home, a perspective most outsiders had trouble grasping. ‘House is insured,’ Pete had said simply, when Alexi had asked him at dinner if he was worried about the beautiful old homestead. He waved out to the glow on the horizon. ‘The more bush we lose, the less the sheep have to eat. Can’t insure that, or the sheep.'”

Life on the land, with its harsh conditions and uncontrollable weather means that people who choose to run a station or a farm, are continually battling and hoping for the best weather and the best conditions in order to make money and keep their properties. They are passionate people and have to be strong in order to survive the ups and downs that come with living off the land as well as demands from banks who don’t care one iota for weather conditions, only money.

The family, Pete, Kelsie, Jack and Lisa were everything you would want in a family, especially one who live and work together on a property like Ridgeview. There was so much respect and love between them, and their love for their land and animals was so strong, that I was immediately drawn into their lives, experiencing everything they were going through and hoping against hope that things would work out. I was holding my breath at times, completely absorbed in their fight to save their land against one of nature’s cruelest beasts, fire.

I enjoyed getting to know all of the characters, especially the quirky ones like old Kev who’d lived on Ridgeview Station for so many years that it was in his blood. Bull, one of the men who come to help the family out in their time of need, using his heavy machinery to try to save the land from burning, was also another genuine and down-to-earth character who I enjoyed. Alexi, a backpacker, and farmhand bought a fresh perspective to the story and allowed explanations of the procedures of life on the land as she learnt to understand how everything worked and ran.

I’m so glad I got to spend time with this family on Ridgeview, and I highly recommend you go and grab yourself a copy of this wonderful Australian tale.

The second square is a Memoir about a non-famous person. For this one, I chose Eggshell Skull by Bri Lee

Eggshell Skull is a memoir by a really strong and brave young woman who didn’t realise her strength until she found herself in a situation out of her control. A situation she started the ball rolling on, without realising how long she would be made to wait for justice. 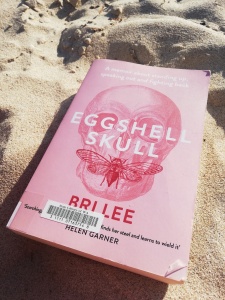 Bri starts off her story at the beginning of her law career, in her year as a judges associate. Through doing the judges circuit around Qld she hears many terrible cases of sexual abuse on children and women in particular, but also on men. As she herself is triggered by these people’s stories, we find out that she has been sexually assaulted as a child, and the long term effect this has had on her. From watching and listening to these stories and cases, Bri also gains the strength and realisation that she needs to face her abuse and her abuser in order to get on with her own life in a healthy way.

The statistics on these kinds of cases are staggering, and as Bri carries on, she finds out how many people she knows who have been victims of abuse It’s hard to acknowledge how prevalent this is in our society. We also learn how few people come forward and report the abuse, and when they do, how few of those cases actually get charged and then how few of those go through the legal system to receive any kind of justice.

She starts the legal ball rolling on a journey that will take almost 2 years to come to and end. Through that time we see her struggle, the abuse she inflicts upon herself throughout the story and the many feelings of low self-worth she suffers, just like many people who have been abused. Bri is extremely lucky, she has the support of her family and her partner behind her, as well as Judge, the man she worked for on the circuit who has become a friend.

Bri falls apart often, but she picks herself up again every time and carries on, fighting for justice against her abuser and against the legal system. I can’t say I was shocked by how badly our legal system lets down the victims of crime, but it was extremely eye-opening and heartbreaking to read about those people’s stories as Bri travels on the circuit and as she wonders if she herself will receive justice.

I take my hat off to all the people that do take the step to bring their abuser to justice in such a terribly flawed legal system. The law has changed over the years, but we still aren’t where we need to be. Women are still too often not believed, are called liars or told they are overreacting and that it was their fault it happened. Things need to change, fast. Attitudes need to change.

A highly confronting story by a brave and strong young woman, who by fighting for justice for herself and telling her story, maybe a catalyst for others to tell theirs, for them also to be willing to fight and for the stigma of sexual assault to be challenged.

Well, that’s it for another bingo round, I hope everyone who’s joining in has managed to cross off another square this week. See you in a fortnight for the next square.

I am an avid read who will read just about anywhere I can. I have over 1200 books on my shelves and 700 on my kindle and a TBR pile I doubt I will ever get through. I have a preference for Australian authors, but still read others. This year has seen me get into more historical fiction which I have really enjoyed. I am a Disability Support Worker, an Art Therapist and the Spec Fiction round-up editor for Australian Women Writers Challenge and I am currently studying to become a Copy-Editor and Proof Reader. View all posts by Claire Louisa